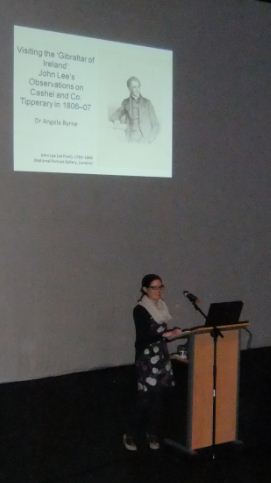 The Tipperary People and Places Lecture Series returned on 18th October for its tenth edition when Dr. Angela Byrne regaled a fine crowd in The Source with the fascinating tale of John Lee’s travels through Co. Tipperary. Dr. Byrne, a PhD graduate from Maynooth University, has spent countless hours transcribing the travel diaries of John Lee (born Fiott), which tell the entertaining tales of his travels through the south of Ireland in 1806-07. What she found in them was a wonderful social and political commentary of Irish life in the early 19th Century, at a time when war raged on the continent and the memories of the 1798 Rebellion were still fresh in the minds of many, especially in Co. Tipperary.
Dr. Byrne began by introducing us to Lee’s background and inheritances in Buckinghamshire, his name changing from Fiott to Lee in 1816 as part of the terms of his inheritance of his mother’s estate, the magnificent Hartwell House. His wanderlust landed him in Dublin in 1806, and saw him make most of the journey from there to Clonmel on foot. He marvelled at the scenery in Carrick on Suir, which he considered be as beautiful as any he had ever seen.

After a sojourn through the southwest he returned to Tipperary once more in early 1807, spending a number of days in the company of Thomas Judkin “Flogger” Fitzgerald. This was the man who a number of years previous had ruthlessly crushed insurgency in Co. Tipperary, and from his writings it appears that Lee was in great awe of both his estate and the man himself. His travels then took him to the Rock of Cashel – nothing extraordinary, in his opinion – and Holycross Abbey, which he described as being in a “shameful” state of disrepair. Throughout his travels Lee makes interesting observations on the state of the housing of the Tipperary populace, their levels of literacy and, perhaps most important, their memories of the events of ’98 and the scars they left on the locals’ minds. Lee then travelled to Limerick, via Roscrea, from whence he departed for Dublin to “take care of matters at home”.
Dr. Byrne illustrated her lecture with some of Lee’s charming sketches of the Tipperary countryside which were a very interesting addition.
There then followed a number of questions from a very enthusiastic and appreciative audience.
Dr. Byrne will publish a book on Lee’s travels through Ireland early next year and it promises to be a most informative, illuminating and enjoyable read. We wish her and the publication well and look forward to it with anticipation.
You can view Dr. Angela Byrne’s lecture here.
Our next lecture takes place on 15 November, when Alice McDermott delivers her lecture entitled “Attempting to Heal on the Hinterlands of Hell: The Great War Endeavours of Four Tipperary Nurses”.