The suitcase of film reels was given to a family familiar with the residents of Moyaliffe House a number of years ago. The suitcase was retained in the attic and a family member brought it into Tipperary Studies, in 2018. While the content could not be viewed locally, some of the film reel boxes had a brief index, which suggested that there was content of social and cultural interest. After discussions with people familiar with 16mm film  and it’s conversion to digital format, the DVD Centre, Burgh Quay, Dublin was identified as a company which carry out such work, which they did to the satisfaction of all.

With the kind permission of family descendants to put some of the material online, the following clips portray aspects of Irish and English history which may be of interest to many viewers.

The air show footage from what may be either Hendon or Ratcliffe Aerodrome, Leicestershire, as both are named on a rough index noted inside the film can, captures many aspects of aviation in the latter half of the 1930s and should appeal to aviation aficionados worldwide. Once more this footage is on 16mm film and it captures the essence of the aviation industry at that time. There are various types of aircraft and even a helicopter included in the film reel. Central to the display were several formation flyovers. Once again it is believed that this footage was recorded by Captain William D.A. Kemmis. Captain Kemmis was married to Winona Rosalie Armstrong, Moyaliffe House, in 1927. One of her sisters Cornelia Ione Kathleen Armstrong married Sir William Lindsay Everard, Ratcliffe Hall, Leicestershire, in 1918. Sir William Everard was a brewer, pioneer aviator and founder of the Ratcliffe Aerodrome. This family connection may account for the air show footage in the collection. Sir William was also MP for Melton from 1924 to 1944

The footage of the Coronation of their Majesties King George VI and Queen Elizabeth and the accompanying scenes around the centre of London were recorded on colour film by, it is believed, Captain William D.A. Kemmis, late of Ballinacor, Co. Wicklow and Moyaliffe House, Thurles, Co. Tipperary. Showing some detail of the carriage procession, the first ninety seconds are somewhat grainy, but nonetheless convey the pomp and ceremony associated with a Royal Coronation. The film of central London, which follows the carriage procession, shows quite clearly how much attention to detail was given over to decorating the streets and building fronts. The Royal insignia, flags, banners and ornamentation only serve to add to the whole festivity of the occasion, which the viewer may clearly see for themselves on the accompanying video.

Tradition dies slowly in the rural countryside, none more so than that of farming life. The short footage of haymaking at Moyaliffe depicts various aspects from turning hay with a horse drawn rake and that of a ‘tumbling paddy’, the latter used to gather in a large amount of hay so that trams of hay could be conveniently made, to that of a farm labourer tossing the hay. This can be dated to September 1937, as it is written on the cover of the film reel box. Near the end of the clip a reaper and binder can be seen in action as a crop of oats is harvested, also at Moyaliffe. The clarity in this footage greatly enhances the events they record, which once again is understood to have been recorded by Captain William D.A. Kemmis.

The horse racing film section is the smallest of the items featured in this Captain William D.A. Kemmis film collection. Running to less than two minutes the action appears to be that of a national hunt meeting at an unknown venue. Nothing is known of the jockey or trainers either, though it is likely that the horse was owned by Captain Kemmis. Once again it is likely that this was recorded in the late 1930s. What is noticeable is that little has changed in the world of horse racing in the intervening years

Perhaps the most eclectic footage in the Captain William D.A. Kemmis film collection is that of the Inniskilling Dragoons ‘Trick Ride’ at Belfast. While the precise location itself is unknown, a note on the interior of the film can, states Belfast, so this much is certain. The Dragoons appear in full dress for almost the first two and half minutes of the film. For the remainder of the ten minute film many of the Dragoons appear in costume with their faces covered by masks, all the while displaying a great range of skills and horsemanship as they enthral the spectators. The date of this ‘trick ride’ is also unknown, but in keeping with other film reels in the collection a date in the mid to late 1930s may also be tentatively suggested. A note on the Inniskilling Dragoons Museum website notes that in 1938 ‘the regiment finally said goodbye to its horses and became a mechanised regiment’, so the date of this footage predates that milestone in the Regiment’s history. Captain Kemmis joined the Inniskilling Dragoons in 1912. He served with the Regiment in the First World War and retired from active service in 1923. 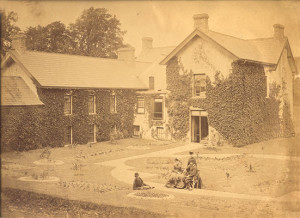 The Armstrongs were a Scottish border clan who came to Ireland to fight for the Royalist cause. Captain William Armstrong was granted a lease of Farneybridge, Co. Tipperary in 1660 and in the next decade continued to increase his holdings in the areas of Holycross and Ballycahill. Towards the end of the seventeenth century the lands and castle of Moyaliffe (Mealiffe) were acquired by William’s son, Thomas 1671- 1741), High Sheriff of county Tipperary. The stone house located near the ruins of the castle was extended over time and also became known as Moyaliffe Castle. Generations of the Armstrong family continued to reside there.

Following the death of his only son, William Maurice in France in 1917, Captain Marcus Beresford Armstrong passed the Moyaliffe Estate to his second daughter Winona Rosalie, known as Jess.

Jess  (1893- 1982)  married Captain  William Daryl Olphert Kemmis (1892 – 1965) of Ballinacor, Co. Wicklow  in 1927 and the couple divided their time between Moyaliffe and Ballinacor, Co. Wicklow until his death in 1965. Jess retained Moyaliffe castle and twelve acres and the remainder was offered for sale to the Land Commission. After her death in 1982, Moyaliffe was bequeathed to a distant relation, Robert George Carew Armstrong of Natal, South Africa. In 1999 the Armstrong family sold Moyaliffe Castle.

After the sale of the house, the archival material preserved there was kept in safe storage by dedicated local historians and eventually presented to the Special Collections Library, University of Limerick.