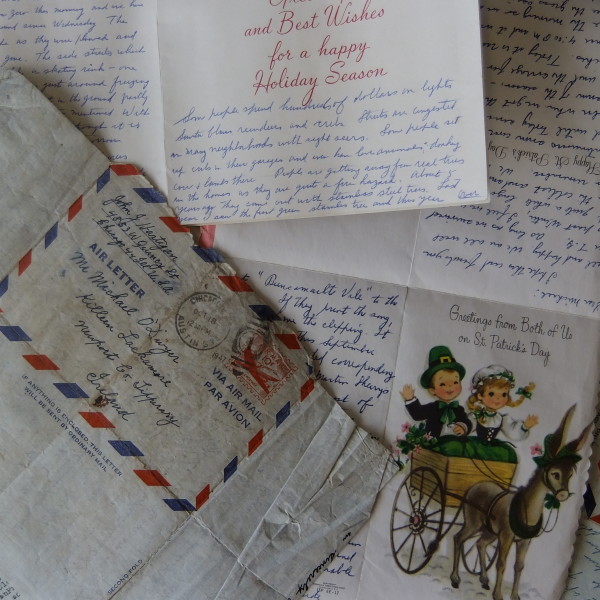 Tipperary Studies would be very grateful for the contributions and donations of printed items of historical interest, relative to Co. Tipperary, that could be added to the ever-increasing archive for the County.

Items such as family papers, photographs, sound and visual recordings, journals, books and letters of interest would be gratefully received by the Library, where they would either be digitised and returned to the owner, or permanently become part of the collection.

If you are in a position to donate material please contact either Mary Guinan Darmody or John O’Gorman, 0504 29278, or email studies@tipperarycoco.ie .

“I often wonder, when I am gone, what will become of all my splendid books? As for papers, data, historians would give their eyes for, will be given to the fire in one of those waves of house cleaning?”

Above is an excerpt from a letter of Michael O’Dwyer, the historian known to readers of the Nenagh Guardian as “Bun Camailte”, to his son Joe, expressing his concern for the future of his vast collection of historical literature. In the winter of 2015 Michael’s grandson – also Michael – ensured that their future was secure and safe from the perils of “house cleaning”. Michael generously gifted Bun Camailte’s vast collection of manuscripts, historical writings and letters to Tipperary Studies, in order to both preserve them for future generations and also make them accessible to interested researchers. The collection includes many articles on local history topics in and around the baronies of Ormond, along with treatments of many other historical events such as the Siege of Athlone, the Battle of Aughrim and Sarsfield’s Ride. Also included are articles on the lives of Irish saints, Mass rocks and holy sites, and some of Michael O’Dwyer’s original poetic compositions.

One of the most interesting elements of the collection is a series of letters he received from John Hartigan, a native of nearby Toor, who worked for most of his adult life as a police officer in Chicago. A study of these letters offers a fascinating insight into an Irish American’s attitude to the tumultuous years of the 1950s and ‘60s, a period that saw the rise of great issues such as Communism, the Civil Rights movement, JFK, the Vietnam War and, of course, the ever-present dread of “The Bomb”. As well as events in America, Hartigan also has commentary on the state of events in his native country.

Tipperary Studies is very grateful to the O’Dwyer family for their generous donation to the Library, as this is a collection that includes much valuable local, social, archaeological, cultural and religious history. We are proud to maintain it and present it to the public.

We are aware that there are many local historians up and down the county that possess similar valuable collections, and, like “Bun Camailte’s” works, we would be pleased to accept them in Tipperary Studies where they would be maintained and presented to interested local historians.