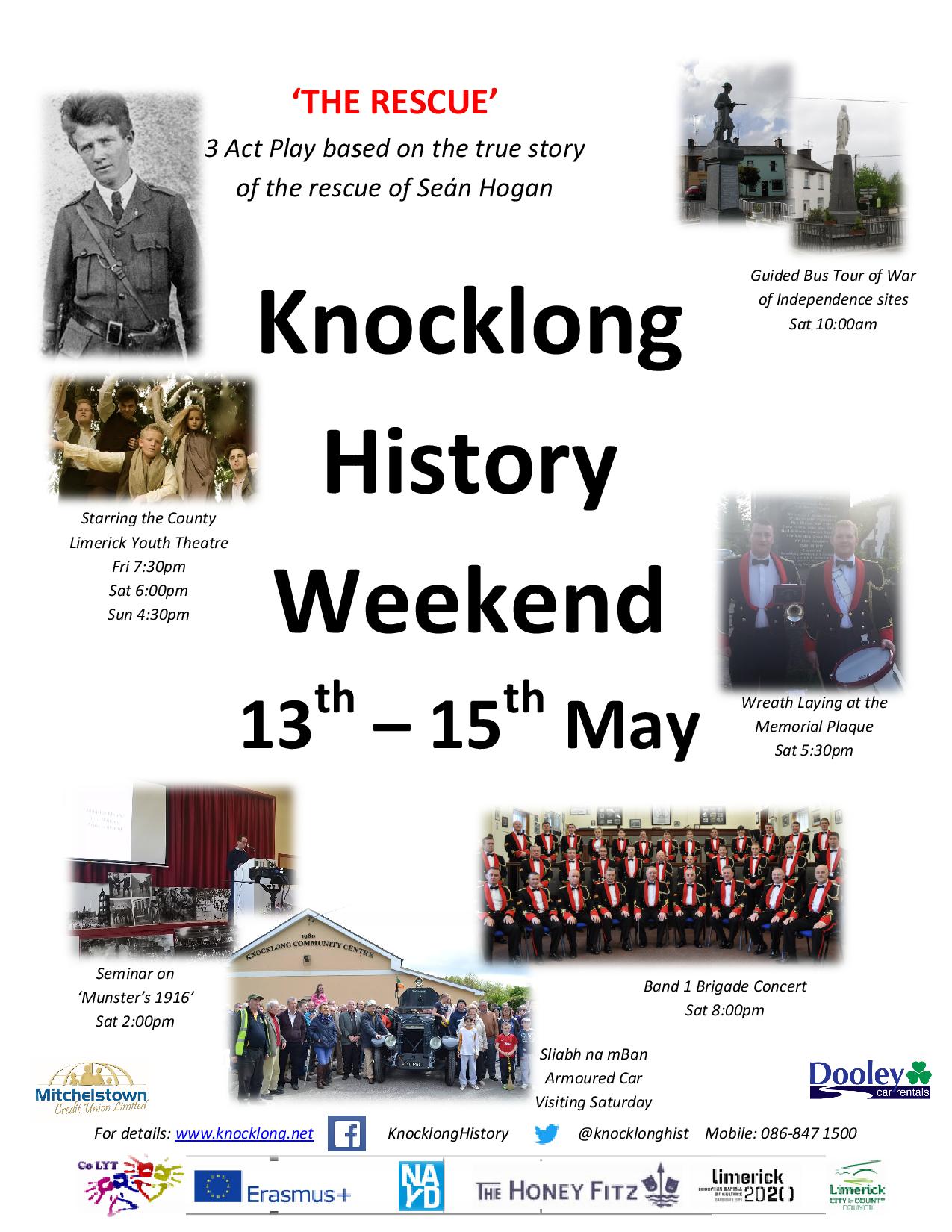 The Knocklong History Weekend 2016 will take place in Knocklong, Co. Limerick on the 13th, 14thand 15th of May. This is a unique annual event, focusing on the Irish Revolution in Munster. It commemorates the famous rescue of Seán Hogan, Tipperary Volunteer, from police custody at Knocklong railway station on the 13th of May, 1919.

The festival will open on Friday evening at 7.30 p.m. at the disused creamery, which will be transformed in the village of Knocklong in 1919. The internationally renowned County Limerick Youth Theatre has devised an original play entitled ‘The Rescue’, written by artistic director Fiona Quinn and distinguished Limerick-born poet, playwright and novelist Clairr O’Connor. The work will dramatize Hogan’s life up to his liberation at Knocklong. Repeat performances will take place on Saturday evening and Sunday afternoon.

At 9.30 a.m. on Saturday, prominent local historian Tom Toomey will lead a bus tour of places in East Limerick associated with incidents during the War of Independence, including Knocklong, Garryspillane, Glenbrohane, Ballylanders, Galbally and Lackelly.

At 2 p.m. that afternoon, a series of lectures will be given at the Community Hall on the topic ‘Remembering Munster’s 1916: The Easter Rising in the South and Its Aftermath’. The Easter Rising was a very significant event in Irish history. Beginning on Monday, 24thApril, men and women dedicated to achieving Irish freedom seized control of buildings in Dublin city centre and held them for six days against sustained assault by Crown Forces. But what happened in Munster during the rebellion? These lectures will afford members of the public an opportunity to learn about this fascinating topic. The expert historians will be Angus Mitchell, Tomás Mac Conmara and Tim Ryan. The questions they will address will include: Who made up the Munster membership of the Irish Volunteers, the Irish Republican Brotherhood, the Cumann na mBan and the Na Fianna Éireann, and what motivated them? What was planned to happen in the province during the rebellion? What were the circumstances surrounding the killings of RIC men Sergeant O’Rourke and Constable Hurley in Moanour, Co. Tipperary? What of Thomas Kent of Bawnard, Co. Cork, the only man to be executed in connection with events in Munster? What was the public reaction in the south to the fighting in Dublin? What was the effect of Limerick Catholic bishop Edward O’Dwyer’s public criticism of the British military? Finally, what were the consequences of the events of Easter 1916 for the republican movement in Munster? The speakers will use slides, including maps and photographs, as visual aids. Members of the public will be encouraged to ask questions during the questions and answers session at the end of each talk and during the panel discussion at the end.

Alongside the talks will be a display of War of Independence memorabilia, including documents, flags and weapons. Members of the public attending the event are encouraged to bring along memorabilia, though they do so at their own risk. Books will be on sale, as will food and refreshments. The Sliabh na mBan, Michael Collins’s armoured car, will visit and tour the local area on Saturday. On Saturday evening, in remembrance of Hogan’s rescue, wreaths will be laid at the entrance to the railway station. On Friday night, events will conclude with traditional music at The Hill public house. On Saturday night, the band of the Irish Army’s Band 1 Brigade, formerly Band of the Southern Command will perform a concert at the Community Hall.

The only event in Ireland covering the Easter Rising and War of Independence from a pan-Munster perspective, the festival will educate and inform the public on an enthralling aspect of their history during this the ‘Decade of Commemorations’.