Photographs from Carrick-on-Suir Macra na Feirme club have been digitised by staff in Carrick-on-Suir library and are now available on our digital archives. Well done to all involved in the project and especially thanks to club members who gave the material for digitisation.

Carrick-on-Suir Macra na Feirme was founded in 1947. It started when Dan Lyons, a rural science teacher at the local vocational school invited a group of local farmers to a meeting in the school to form a club.

The meeting took place at the old vocational school which was located at the town side of Dillon bridge.” Technical Institute” is visible, in concrete lettering, beneath the 1st floor today

The first officers elected to the new Macra club were:

The first meetings consisted of lectures on all topics relating to farming, farming skills and animal husbandry. Farm visits were organised to progressive farms in the southeast as well as to research centres at Moorepark, Johnstown castle and Oakpark. Today, in 2022, these research farms are owned by Teagasc, The Agricultural food and Development Authority, part of the Department of Agriculture, Food and the Marine.

Stock judging, farm tasks and artistry in the home competitions followed on later. During the 1960s and 1970s, Field evenings were a big attraction. These were normally held at the weekend. Macra na Feirme clubs travelled to other clubs within the county and to others in adjoining counties and took part in competitions such as Stock judging, quizzes, baking etc. The field evening was held on a farm and each club had their own slot in the calendar. The evening ended with a dance and presentation of prizes. Carrick-on-Suir Macra field evening was always held on the feast of Corpus Christi.

A Rural Science course was organised by UCC and the branch in the 1950s leading to many members been awarded diplomas.

Ladies were admitted as members to the club in 1965. They were sisters of present members or farmers daughters.

When Carrick-on-Suir Macra na Feirme was 21 years old, celebrations were held in the Ormond hotel, Clonmel in 1968. The National president of Macra, Joe Rea, attended along with lots of former and present members.

1972 saw the celebration of the silver jubilee at Hearns hotel in Clonmel. The founder members of the club attended along with the National president of Macra na Feirme, Declan Martin.

Membership was opened to all young people from different walks of life in the late 1960s and early 1970s. The branch was very active in the 1970s, winning many competitions including two all-Ireland drama finals, County finals in debating and question time, the Munster final in light entertainment and artistry in the home competitions. Carrick-on-Suir Macra also ran a float in the towns St. Patricks day parade down through the years. During the winter months, indoor soccer matches were organised for members, by the club, to beat the winter blues.

In 1977 the club produced and launched a booklet to celebrate the club’s 30th year. Overseas trips were organised with neighbouring branches of macra in Tipperary such as to Gretna Green in Scotland where there was a mock wedding ceremony over the blacksmith’s anvil to everyone’s delight!

During the late 1970s and early 1980s, membership of the club was at its highest with between 70 and 100 paid up members. There were macra clubs in most parishes of the county at this stage. The 40th anniversary dinner of the branch was held in the Granville hotel, Waterford in 1987 at which a good number of past and present members attended.

Declining member numbers over a period of 10 years led eventually to the club bowing out in 1997. Most clubs in the county came under pressure at this time also and many of them closed their doors for the last time.

On January 25th, 2020, Carrick-on-Suir Macra na Feirme celebrated 50 years from its formation in 1947 to its cessation in 1997. Mass was celebrated before the main celebration for deceased members of the club.

A celebration meal followed at the Carraig hotel where more than 150 people attended. Past members from its foundation right up to the late 1900s attended.

Johnny Dowley of the Connawarries and one of the club’s founder members cut the celebratory cake and gave us some of his memories of his time in the club. Former members who are musicians gave the audience some tunes from the past. An extensive collection of photographs from 1947 right up to 1997 were on display during the night and proved to be a great attraction.

The photographs have now been digitised, with thanks, to Librarian Carol Delaney and staff at Carrick-on-Suir Library and will be there to see by all interested well into the future. 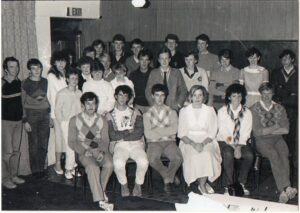 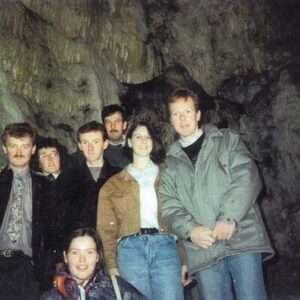 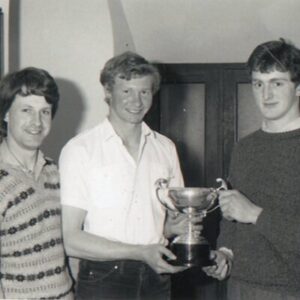