Suffering from lameness, sciatica, sore eyes, fever, arthritis or skin disorders? Up to the mid 19th C. you trotted along to the local sweat house. Though getting to this one in Boolatin, Silvermines with rheumatism would be a bit problematical.

The earliest written record describing a sweathouse dates from the end of the 18th Century but it’s likely that the tradition is much older. They are small, simple, drystone structures. Usually built into banks like the Boolatin example. The Archaeological inventory for North Tipperary records three examples. 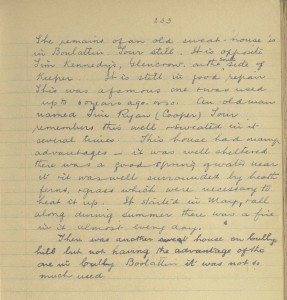