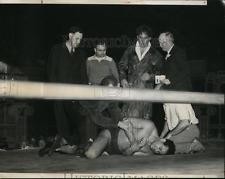 In November of 1934, Dr. Pat O’Callaghan handed in his notice to resign as Medical Officer at what was then known as Clonmel Mental Hospital. He intended taking up a position closer to his native place of Duhallow, in West Cork. At this time O’Callaghan was perhaps Ireland’s most famous sportsman, and in 1928 he had become independent Ireland’s first Olympic gold medallist, throwing the hammer 168′ 7″ in Amsterdam. He repeated the dose four years later in Los Angeles. Perhaps lesser known is his professional wrestling career, which he undertook on a spell in the United States in the late 1930s, where “he tamed foe after foe” under the nickname of “The Wild Irish Rose”. His luck ran out, however, when he squared up to George “K.O.” Koverly in Los Angeles in August, 1938. In his book The Pro Wrestling Hall of Fame – The Heels, Greg Oliver takes up the story;

“Koverly beat the living daylights out of “The Wild Irish Rose”. First, he smashed poor Pat across the nose. Blood flowed like claret. Then he went to work on Pat’s ears. With three or four slashing swipes, he sliced The Doc’s auditory appendage to ribbons… The referee finally stopped it. To the best of my knowledge, Pat was never off his feet. Neither was K.O. Koverly… The incident ended O’Callaghan’s flirtation with wrestling.”

This excerpt from the Clonmel Chronicle raises the possibility of O’Callaghan’s involvement in the professional wrestling circuit in America, and also quotes the figures he was offered. $125,000 in today’s money would be somewhere in the region of €6 million. So it’s no wonder “The Doc” relented and took on the challenge. He would later return to practice medicine in Clonmel once more, where he delighted young visitors to his surgery by showing them his Olympic gold medals.