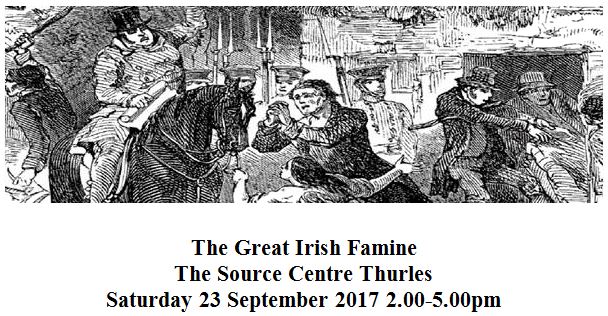 The National Famine Commemoration will take place at the Famine Warhouse 1848, Ballingarry, Co. Tipperary on Saturday 30th September 2017. As part of the programme for this event Tipperary Heritage Office and Tipperary Studies invite you to an afternoon lecture series on the Great Irish Famine.
Dr Martin Mansergh: Vice-chair of the Government-appointed Expert Advisory Group on centenary commemorations. Between 2002 and 2011, he served as a Senator, TD, then as Minister of State for the OPW, Finance and the Arts. A member of the British-Irish Parliamentary Body till 2008, and the Council of State during President McAleese’s second term. Former diplomat, then political advisor to Taoisigh Charles Haughey, Albert Reynolds, and Bertie Ahern, he was a back-channel and negotiator during the peace process. Author of The Legacy of History for making peace in Ireland, and co-winner of the 1994 Tipperary Peace Prize.

Topic : The Great Irish Famine
A look at the enormous significance of the Famine in Irish History and its commemoration, Young Ireland and the 1848 rebellion drawing some parallels with the world of today.
Dr Ciarán Reilly is an historian of 19th and 20th Century Irish history and is author of a number of books on the Famine including: The Irish Land Agent, 1830-1860: the case of King’s County (Dublin, 2014); Strokestown and the Great Irish Famine (Dublin, 2014) and John Plunket Joly and the Great Famine in King’s County (Dublin, 2012).
Topic: ‘In Bloody Tipperary’: Eviction and clearance during the Famine years.
One of the more remarkable aspects of the process of eviction and clearance during the years of the Great Famine was the apparent disinterest of local communities towards the plight of the evicted. Many accounts suggest that only those who were to be evicted were present at the eviction and there was little opposition to the crowbar brigade and the hut tumblers. This was not the case in county Tipperary where eviction was met with fierce opposition. Indeed, as one newspaper editorial commented, that in other counties they complain when people are evicted, while in Tipperary ‘they murder’. This talk will highlight how eviction affected the inhabitants of Tipperary in the 1840s and their collective reaction to it.
Dr Thomas Mc Grath: Local historian and member of the 1848 Historical Society, Ballingarry.
Topic: ‘Young Ireland, Famine and the 1848 Rising’
The Famine Warhouse 1848 was the scene of the 1848 Rising by the Young Ireland Movement attempting to overthrow British Rule at the height of the Famine in Ireland. The site for this years National Famine Commemoration Dr Mc Grath will look at the Young Ireland movement and the rebellion and its legacy in Ballingarry.