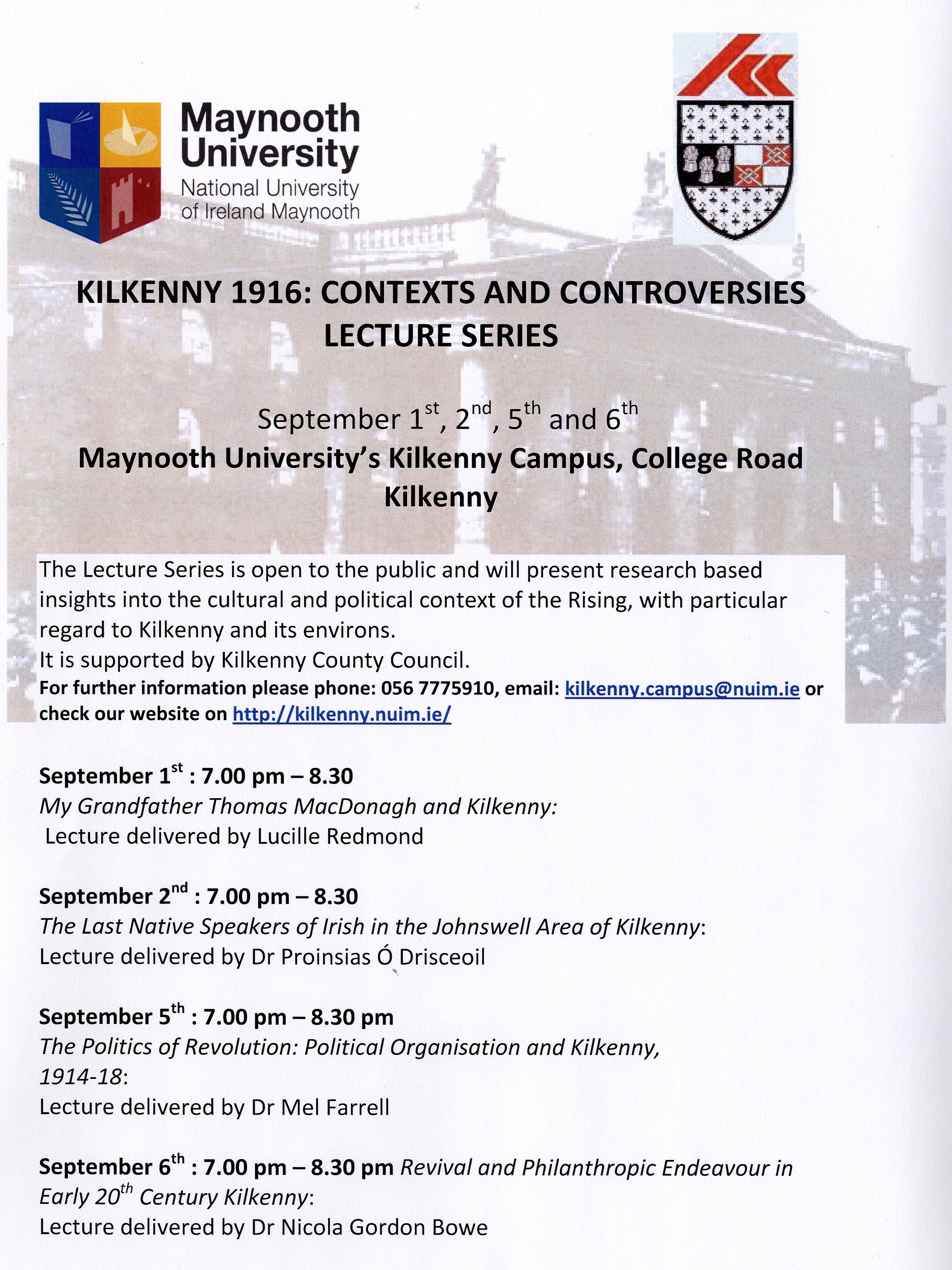 In September 1901, Thomas MacDonagh arrived in Kilkenny, appointed to teach English in St Kieran’s College. He was taking the place of the poet William Byrne from Rathangan, Kildare, whose book A Light on the Broom, written under his pen name of William Dara, was the hit of the season. Byrne was another who had been tipped for the priesthood but escaped. Now he had moved to teach in St Mary’s Knockbeg College in Carlow. With a horrid synchronicity, in 1916 he would be appointed to MacDonagh’s post as assistant professor of English in University College, Dublin, after MacDonagh’s execution.

Kilkenny was an intensely political place when Thomas MacDonagh arrived there at the turn of the 20th century. Here, he made the best friends of his life — people like the feminist Frank Sheehy Skeffington, the trade unionist Patrick Kennedy and the American labour theorist Dom Hackett. He published his first book of poetry, joined the Gaelic League and became its local secretary — and learned to love cycling the countryside. Kilkenny would change his life, his philosophy, and his future.

Lucille Redmond is an award-winning Irish writer (Hennessy, Irish Academy of Letters) whose stories have been published in Irish national newspapers, international literary magazines and anthologised in English, German and Italian.

Lucille Redmond’s family played a hugely influential role in the Easter Rising and the struggle for independence, her grandfather was Thomas MacDonagh and her granduncle Jack fought alongside his brother in Jacobs Biscuit factory.  While Thomas held command at Jacob’s, Lucille’s grandaunt Nellie Gifford (the sister of Thomas’s wife Muriel) was in the Royal College of Surgeons alongside Michael Mallin and Constance Markievicz. Another grandaunt, Muriel’s sister Grace, was engaged to Joseph Plunkett, and poignantly they married in Kilmainham Gaol just hours before his execution.

Lucille is currently writing a book about her grandparents and their children.

The movement for the revival of the Irish language was a major public force in the revolutionary period. However Irish-speaking districts still existing in many parts of Ireland sometimes attracted little notice among Gaelic League revivalists.  This lecture will focus on such a community, the native speakers of Irish who continued to live in the Johnswell district near Kilkenny city into the twentieth century.

Dr. Proinsias Ó Drisceoil has written extensively on the literature and cultural history of Gaelic Ireland and Scotland. Publications include Ar Scaradh Gabhail: An Fhéiniúlacht in Cín Lae Amhlaoibh Uí Shúilleabháin (2000) and Seán Ó Dálaigh: Éigse agus Iomarbhá (2007).  He was a contributor to the New Oxford Dictionary of National Biography and to the Encyclopedia of Ireland and was co-author of Foclóir Litríochta agus Critice (2007), a dictionary of literary terms.  Formerly editor of the Tipperary Historical Journal, he has a particular interest in Scottish Gaelic.

This paper will examine the politics of the revolutionary period from the perspective of grassroot organisations in Kilkenny, 1914-18.

Dr. Mel Farrell is a Teaching Fellow at St. Patrick’s College, Dublin City University. He is a political historian specialising in nineteenth and twentieth century Irish and European political history.  His research is centered on democratisation, political parties, party organisations and political culture.

Standish O’Grady (1846-1928), barrister, romantic nationalist historian, playwright, novelist, journalist and editor of  the Kilkenny Moderator and the All-Ireland Review, Captain the Hon. Otway Cuffe (1853-1912), royal courtier, theosophist, Celtic Revivalist, Utopian Socialist, committed Gaelic Leaguer  and Mayor of Kilkenny, and Ellen, Countess of Desart (1857-1933), anti-suffragist,  philanthropist,  Freeman of  Kilkenny  and member of  the first Irish Free State Senate were drawn together in early 20th century Kilkenny.  Their ideological vision of and wholehearted commitment to local, national and industrial regeneration led to a series of exceptional architectural and cultural enterprises in and near the city of Kilkenny.    These have been appreciatively documented since they were begun in 1907, but not  visually contextualised and synthesized.

Has lectured, advised, curated exhibitions and published and reviewed internationally on 19th century, 20th century and contemporary art, design and the applied and decorative arts and crafts.