Interested in Irish War Dead? this is a fantastic opportunity to access information for FREE with the help of an expert in the field, Tom Burnell. In the Old Abbey Inn in Holycross on 09/11/2018 from 7pm to 9pm

Tom has managed to secure (for one night only) the ‘War Dead Databases.’ These are usually held in Camden Fort Meagher, a Coastal Artillery Fort overlooking Cork Harbour which is focused on remembering our Irish Great War dead.
These databases are the biggest reference source available in the world specifically on Irish Men and Women from the 26 counties who were killed or died in the Great War. They were used to compile 31 books on the Great War including the “26 County Casualties of The Great War,” a fifteen volume set which replaces ‘Ireland’s Memorial Records’ and brings this country into the 21st Century.
On the night you can get all the available information on an ancestor who was killed in the war from the 26 counties. It will include all the Allied Armies, Canadian, U.S.A., New Zealand, South Africa, British, Australia, and Canadian, armies, Navies, and Air Forces. It would also include the relevant Merchant Navies. Also on the night will be a 26, 000 photographs of serving personnel that have appeared in all the newspapers of the period in the 26 counties.

This is a free service, and has never been done before in this country. If attendees choose, Suir Haven Cancer Support Centre, Thurles would welcome donations. 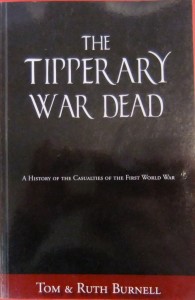