In 1695 under the penal laws a ban on all education not through the established (Anglican) church was imposed in Ireland. 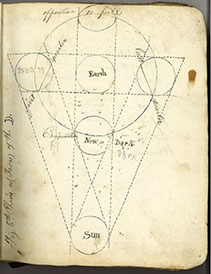 In immediate response hedge schools started to appear around the country from the early 1700’s, becoming the most common form of education by the end of the eighteenth century and surviving up until the mid-nineteenth century.

The hedge schoolmaster was paid by the families he taught, often in ‘kind’, with food and fuel. Schools were unregulated and the subjects taught depended on the ability of the teacher. The basic three R’s were taught, reading, writing and arithmetic and often a little Latin and Greek. History, geography and mathematics were sometimes included. Tipperary Studies has a hedge school master’s notebook from 1827 which covers topics in astronomy and geography.

By 1793 the law against Catholic education was repealed but hedge schools continued to grow.
Thomas Guerin’s account of his hedge school education in Tipperary in the years before and during the introduction of the national school system in 1831 gives an account of this style of schooling.