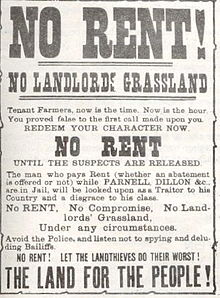 With the Land War raging, a potentially explosive sale of “the interest of the tenants” of a number of farms took place in Thurles in late June 1881. Sales such as these were known to be the source of great civil unrest, and a similar auction a few weeks previous in Clonmel had led to rioting. According to this report, events in Thurles seemed to have passed off in a much more peaceable manner…

One would not have believed, however, that events passed by so serenely having read “R.J.M.’s” poem, based around the event, below. But a rhyming political satirist should never let such trifling matters as the facts get in the way of a vigorous, romping verse…

Faith, I’ll own I am sore and sorry, in my head is many a hole,
Sticking plaister, like ornamentation, is smothering up my poll,
And if you would ask the rason, why here it’s plain to see,
It was thro’ their not clouting Goddard, that the boys got a-clouting me.

‘Twas agreed, you’ll perceive, at a meeting, when the agent for rint would call,
Some would be paying Griffith’s, and some paying nothing at all;
The last we should pay was the landlord, what on earth did the man disarve,
Give the Gombeen man all our money, and let the ould masther starve.

That’s the way, so the Land League tells us, and we daren’t of course refuse,
So the shopkeepers got all their money, and the priest, faith! Got double dues;
Well, troth! If my way they granted, the masther should have his share
Before those who make us rob him, but that’s neither here nor there.

Well, be that as it may, to our offers the agint would not consint
To take from tenants “Griffiths” or less than a half year’s rint;
But we stuck to the Land League’s taching, and we stuck to our rints aswell,
So he sint for that divil Goddard to come down our farms to sell.

When we heard that Goddard was coming, faith, the news all the boys did vex,
And we swore if we didn’t kill Goddard the divil might break our necks;
So all of us went to meet him when he came by the early train,
And many’s the stout boy swore it, he’d never go back again.

As the divil’s good luck would have it we hadn’t there long to wait,
For the thrain was a thrifle early and the peelers a thrifle late;
Five hundred was in to kill him, and sorra one should need care,
For no one could ever be taken with divil a peeler there.

Five hundred shillelaghs were ready and only one skull to crack,
When out walked that divil Goddard, ‘pon me conscience, the boys moved back,
Out he comes with his hand in his pocket, ‘twas a pistol I think he clutched,
But be that as it may, be jabers, not a hair of his head was touched.

Pat Dolan says, Faith he’d have struck him but the boys all around did crush;
Tim Maguire, well, I think got frightened, for I noticed he’d lost his blush;
And meself thought the divil was in it and was making the sign of the cross,
But however on earth it happened we let Goddard go to loss.

And so he got safe to the Court house, and the sorra much time was spint
Till he made us pay out to the Sherriff the costs and a whole month’s rint;
When I seen how he done his business without blather, or talk, or fuss,
Thinks I, you know more about it than the chaps that is taching us.

Says Dan Moran to me, “you’re a coward”, says I, “you’re a liar, Dan”,
“Why didn’t yourself hit Goddard?”, that’s the way the row began.
And every boy that was in it before you could sneeze or cough,
Was leatherin’ away like blazes because we let Goddard off.

There was tarin’, and swarin’, and fightin’, and leatherin’ round the town,
There wasn’t a boy that was in it that hadn’t a batthered crown;
So we paid our rints and got murthered, and stuck to the Land League still,
And every man there got hurted but the man we went out to kill.