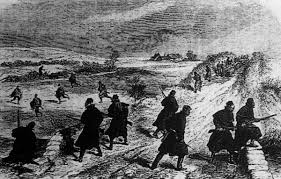 Sunday. 5th of March, marks the 150th anniversary of the Fenian Rising. On that night in 1867, bands of Fenians rose out all over the country in what was the first attempt ever to form an Irish Republic. Borrisoleigh and the surrounding areas were no exceptions, with groups assembling at Barnane, Dovea, Moyaliffe, Roskeen, Drombane and in Borrisoleigh itself. While the rising could be described as an abject failure, with the participants quickly rounded up and imprisoned or transported, it did go on to inspire a new generation fifty years later with the insurrection of 1916. In Templederry, a band of Fenians made an attempt to raid ”a house of the gentry” to procure arms. However, the police and militia were aware of the plan and the men were ambushed and captured. In the incident, one of the group, Jeremiah Bourke was shot and seriously wounded. His fellow conspirators were captured, tried and transported to Australia but because of his injuries, the trial of Bourke was delayed. The following year he was tried in Kilkenny and sentenced to eighteen months in prison. Jeremiah Bourke was to go on to play an important role in the War of Independence. His family home in Templederry was a noted safe haven for men ”on the run” and indeed, Sean Treacy, Seamus Robinson and Sean Hogan were to find refuge there. His greatest contribution perhaps, was his role as a judge in the Republican courts. As the country bordered on anarchy in the wake of the truce of 1921, with burnings, reprisals and acts of vandalism becoming commonplace, Bourke stepped in and was steadfast in the protection of his Protestant neighbours, ex British army men and retired RIC. On Sunday, March 5th, between 1.45pm and 2.00pm, we assemble at Ballyroan bridge and walk the mile to Glenkeen graveyard, to the grave of Jeremiah Bourke. Our program of events will be as follows.

1.45 – 2.15 Park and Assemble at Ballyroan Bridge (at Nenagh end of Borrisoleigh). A small number of cars can be facilitated to bring those in need of transport to Glankeen 2.15 –2.45 One mile Fenian Walk from Borrisoleigh to Glankeen Graveyard, with everyone, children especially, invited to bring small bunches of daffodils to place on the Fenian Graves 2.55 Piper (Joe Barry of Templemore Pipe Band) will lead the assembly into Glankeen Graveyard from the public road, 3.00 Event Convenor, Seán Hogan, calls the assembly to order and explains the plan 3.05 The Fenian Proclamation, forerunner of the 1916 Proclamation of an Irish Republic, is read by Clare Hanley (nee Kenny). 3.10 Blessing and Prayer by Fr Liam Everard, PP Borrisoleigh 3.15 Wreaths laid by the Bourke family in the grave of Jeremiah Burke; Children called forward to lay flowers on the graves of others (eg Seamus Burke); Other wreaths by Historical Societies 3.20 – 3.30 Oration at the Graveside of Jeremiah Bourke by Tipperary Historian John Flannery 3.30 – 3.35 Songs by Paudie Bourke “Templederry my Home” “The Bold Fenian men” 3.35 – 3.40 Last Post National Anthem by Piper Joe Barry 3.35 -4.15 Return walk to Borrisoleigh and move to Borrisoleigh Community Centre for event hosted by Borrisoleigh Historical Society. A series of archive photographs of Tipperary Fenians and related archive material will be on display, and the public will be invited to bring and display historical family mementos and memorabilia relating to their ancestors and the Decade of Centenaries. 4..00 – 4.30 Tea and refreshments in Borrisoleigh Community Centre, courtesy of Borrisoleigh Historical Society 4.30 Convenor calls order for second part of event of the day 4.35 Presentation of Commemorative Plaque by Michael Delaney, Chair, Borrisoleigh Historical Society. 4.40 Lecture by John Flannery – “The Fenians in Tipperary” 5.15 “Voices of Tipperary Fenians” – Borrisoleigh College Transition Year Students.5.30 – 5.45 Fenian Songs 5.45 – 6.00 Facilitated Reflection and Discussion on Event 6.00 Formal Event Closes   Alternative Plan in the event of very wet, inclement day on 5th March. Crowd to be directed to Community Centre and Fenian Walk cancelled Small Group to lay wreaths and flowers at Glankeen instead Undertake as much of programme as possible within Community Centre