With no census taken in Ireland between 1911 and 1926, the registers will be considered a valuable genealogical resource as well as an interesting social snippet. They list the name and address of the dog’s owner, and the breed, sex and colour of dog.
Dog licences were first introduced into Irish law in 1865 and the licences were issued the following year. Their purpose was to make it easier to identify the owners of dogs who worried sheep or caused any other trouble and so make the owners liable for all damages.
A licence cost 2 shillings per dog with an extra 6 pence in administration costs. This would be approximately €6.60 in today’s money. In 1920, the licence increased to 4 shillings per dog, with no increase in administration costs. The licences were issued in the same courts as held the Petty Sessions. They were purchased in the Post Offices with details being forwarded to the Clerk of the Petty Sessions. Not surprisingly most owners registered just one dog, with smaller numbers having two or more. In the two volumes held by Tipperary Studies, the largest number of dogs registered by one owner was ten, when on 31 March 1919 John Egan of Poulacapple registered a male sheepdog and nine greyhounds, two males and seven females.
The majority of licences were purchased in the first quarter of the year with almost none purchased in the latter half. Working dogs such as sheepdogs, collies, greyhounds, terriers and setters were the most popular with only a small number of the smaller toy breeds. Pet ownership had still to become popular with people. Of these toy or lapdogs, the Pomeranian, more commonly called the Pom was the most numerous. Reverend Daniel O’Brien P.P Drangan owned a Pom in addition to the only Pekinese registered in the two volumes. Two male black pugs were registered by Mrs. H.A Cooke, Ballynonty. Both Steward Campbell of Kilcooly and James O’Keeffe, Poynstown each had one of the very small number of dachshunds registered in 1919. Catherine Campion of Gortnahoe owned also owned one of these scarce specimens. There was no mention of our native Irish wolfhound.
Mr Ponsoby of Kilcooly registered a total of six dogs, two greyhounds, one male and one female, two female collies and two terriers, one being a fox terrier, the other an Aberdeen terrier. This breed is presently called the Scotch terrier. The only other Aberdeen terrier to be listed is owned by his neighbour Frederick Sexton. Surprisingly very few people registered a dog as mongrel, i.e. mixed breed. The only Airedale terrier is registered to R. Briscoe of Ballyphillip in 1923.
Another interesting thing to note is that most owners favoured male dogs. Mr. Frederick Armitage of Noan Estate registered five male dogs in 1919, a black retriever, a black terrier, black and white fox terrier, tan white and black sheepdog and a ‘try’ (tri-colour) Yorkshire terrier. The volume covering the townlands in the Killenaule Ballingarry Petty Sessions area states that a total of 978 licences were issued in 1918.
Have a look at the Tipperary Studies digital website and see how many names you recognise in your area. 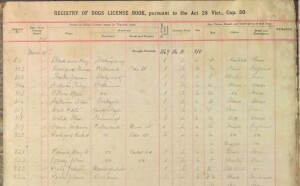 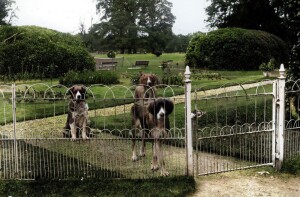