The Tipperary Star report on the 1949 County Hurling  Final between Borris-illeigh and Knockavilla covers an entire page of the paper on November 5th.

Refereed by Con Murphy of Cork the outcome was never in doubt with Borris leading all the way and finishing 4-6 to Knockavilla’s 2-1. The original match programme has been digitised and added to our online collection https://tipperarystudies.ie/tipperary-gaa-senior-hurling-county-final-match-programmes/ and I will include just a taster of the full report here.

The Kenny brothers appear to have been the stars of the team though the reporter took exception with Sean Kennys’ fondness for the solo run. He also questioned the sending off of Phil Maher in the 20th minute, though it didn’t seem to cause Borris too many problems as they were 4-2 up at half time to Knockavilla’s nil! 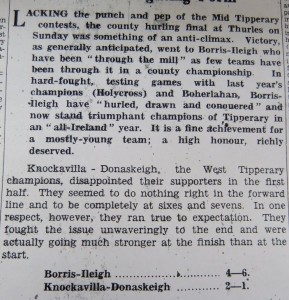 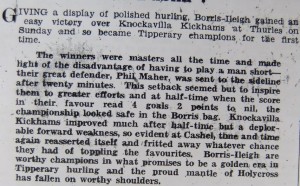 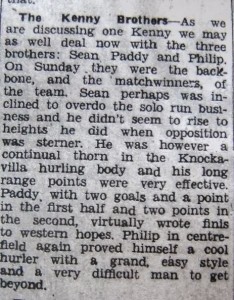 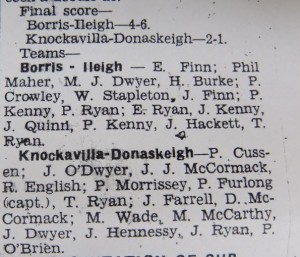