The Cathedral of the Assumption was consecrated on June 21, 1879, by Archbishop Thomas Croke. Work on replacing the ‘Big Chapel’ with a new cathedral was initiated by Archbishop Croke’s predecessor, Archbishop Patrick Leahy. Designed by James Joseph (J.J.) McCarthy (1817-1882) work on the cathedral was completed in 1872 and was only consecrated in 1879 when it was free of debt.

The cathedral was erected on the site of what was once known as the Big Chapel. While the church structure itself haschanged considerably the functional use of the site remains the same, that of Roman Catholic worship.

The façade has as its model the Cathedral of Pisa, and is impressive with the campanile (bell tower) on the left and the baptistry on the right. The façade, in Romanesque architectural style, with Irish marble, Aberdeen granite, grey limestone and Portland stone, has three doors leading to the interior. Three statues of Portland stone surmount the cornice above the entrance doors, Our Lady Assumed into Heaven, St Patrick and St Albert.

The Campanile is 120 feet tall and 25 square. The clock in the tower was given to the people of Thurles by Archbishop Croke on the occasion of his Episcopal Jubilee, in July 1895. J. Smith and Sons, Derby, England manufactured the clock. It was first powered by electricity in 1968.

The bells in the Campanile were blessed by Archbishop Leahy on 29 June, 1868. Each bell in the eight-bell peal is dedicated to a particular saint or mystery. The inscription on the large bell reads:

Patrick Leahy, Archbishop of Cashel, caused us sisters to be made by John Murphy, A.D. 1867. I am to the honour of Go and of the Blessed Virgin Mary Assumed into Heaven.

Other bells are dedicated to St Albert and St Albeus, Saints Joesph, Augustine, Columba, Peter and Paul. Having been rung by bell ringers for over 100 years, the bells were electrically programmed in 1978. 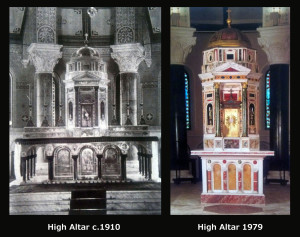 On the left is the High Altar, c.1910. After centenary renovations in 1979, the altar was restructured in line with Vatican II principles.

The tabernacle is the oldest feature of the Cathedral, being a link with church architecture in Italy from the 1500s. It was originally made for Gesù, the church of the Jesuits in Rome, where it remained for almost 300 years. It is the work of Giacomo della Porta (1537-1602), one of the architects of Saint Peters and a pupil of Michelangelo.

When the Gesù church was being renovated in the mid-nineteenth century Archbishop Leahy purchased the tabernacle for his new cathedral. The door is bronze with a silver host bearing the letters HIS over three nails.

The pulpit is very ornate and hexagonal in shape, with the Lord and the four Evangelists, Matthew, Mark, Luke and John, represented in its five panels.

It was erected by the people of Thurles in 1878.

In the post Vatican II era the readings and gospel are preached from the ambo in the sanctuary, rather than from the pulpit.

The altar of Our Lady in the eastern transept has arcading, panels and pillars, similar to that of the Sacred Heart Shrine in the western transept.

The tabernacle, made of statuary marble, is inlaid with lapis lazuli, agate and other precious stones.

The statue of Our Lady, like that of the Sacred Heart, is the work of Giorgio Benzoni, who was paid for his work in February 1872. 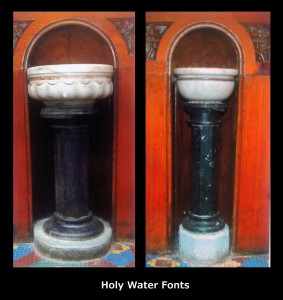 Inside the main entrance doors are two holy water fonts, which were used in the Big Chapel for baptism.
Features such as these are reflective of the long history of religion associated with the site. 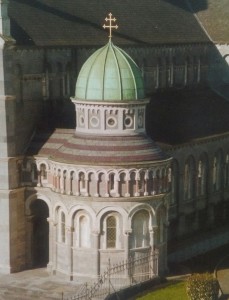 The Baptistry resembles that of Pisa and other continental cathedrals in that it is separate from the main building.

It is built in Byzantine style, with the limestone used in its construction sourced locally.

In 1927 the door was recovered in copper. 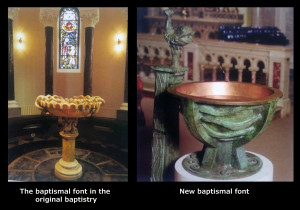 On the left is an image of the baptismal font in the original baptistry. It is unusual in that its initial purpose was that of a fountain. This may be seen from the many water exits along its fluted edge. The basin is supported by three sea-horses and it has four inter-twined serpents carved in relief above its upper rim.

A stained glass window in the baptistry depicts the baptism of Jesus Christ. The first baptism in the cathedral after its consecration was that of Laurence Haven, who was baptised on 23 June, 1879.

On the right is the new baptismal font, which was incorporated into the Cathedral re-decorations of 2002-03. The new font and Aumbry (beneath) were designed by Mark Ryan, liturgical designer. They are made of cast bronze mounted on Portland stone.

The Aumbry contains the holy oils, Catechumens, Chrism and Infirmorum, which are used in the celebration of the sacraments of baptism, confirmation, anointing of the sick and ordination.

The Stations of the Cross were painted for the centenary celebrations.

Depicted in this image is the second station, Jesus carries his cross.

Between 1879 and 1979 there were 18,217 baptisms; 4,068 marriages; 997 ordinations and thousands of masses, sacrments received, novenas and vigils.
For further reading see the accompanying booklets which may be read in the Tipperary Studies department of Tipperary County Council Library Service, Source Library, Thurles.

A copy of the centenary booklet Cathedral of the Assumption, Thurles 1879~1979 may be downloaded here.

A copy of the booklet Cathedral of the Assumption, Thurles:An Historical Outline may be downloaded here.

Tipperary County Council is not responsible for content hosted on external websites linked in the buildings review of Cathedral Street, Thurles, Co. Tipperary.