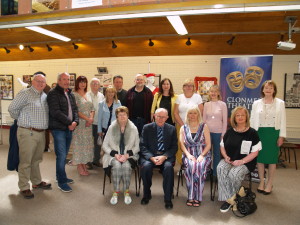 Back in 1969 a number of members of St. Marys Choral Societydecided that the Choral Society should also do drama. With that in mind they organised readings for a play. The response was so good that to accommodate the numbers they decided to put on two productions. ‘The Importance of Being Earnest’ and “The Playboy of the Western World”. Brendan Long, Ina Long, Stella O’Sullivan, Denis O’Sullivan, Mary Burke, Margot Prendergast, Seamus Maher, Davy Fenlon, Leo Wallace and Joan Dempseywereamong the founder members. All was going well until the Choral also started rehearsals for their show. It soon became clear that there wasn’t enough room to accommodate everyone. So on Sunday 23rd of February 1969 those interested held a meeting in Hearn’s Hotel and they decided to form a separate Group. The sister group would be known as ‘Clonmel Theatre Guild’. They had no venue and no funds but they had members with talent, commitment and a passion for drama. They quickly formed a committee and seven weeks later the Guild performed the two full length plays. Both plays were performed in the same week with two completely different casts in Our Lady’s hall in Morton Street. Since then the Guild have performed quality drama to a very high standard.
In 1978 under the directorship of Stella O’Sullivan they commenced Dinner Theatre productions in the Clonmel Arms Hotel, creating a whole new form of theatre. Dinner Theatre has proved popular over the years since.

Silver Jubilee (25 years)
They marked their Silver Jubilee Year in 1994 with “Dancing at Lughnasa” (the first Irish amateur group to secure the rights to perform it) directed by Brendan Long. Also “Juno and The Paycock” directed by Stella O’Sullivan.

Ruby Jubilee (40 years)
In 2009 the Guild celebrated 40 years and marked that year with a wonderful production of “The Crucible”, directed by Simon Thomson. It had a cast of 21 staged in the White Memorial Theatre. Also“Live ALittle Love ALittle” 3 one act plays directed by Stella O’ Sullivan in Raheen House Hotel. Over the last 50years the Guild have performed in a number of venues starting with Our Lady’s Hall in 1969, White Memorial Theatre from 1981, The Clonmel Arms 1978-2003, Hotel Minella 2006, The Main Guard in 2007-2008 and Raheen House Hotel from 2009. 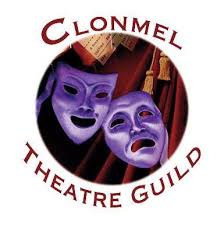 Me A Tenor” directed by Sarah Finnegan a dinner theatre production and finished with a superb performance of “One Flew Over The Cuckoo’s Nest” in the White Memorial Theatre. This had a wonderful cast of 15 and was directed by Anne Williamson.
As part of the Golden Jubilee celebrations, the Guild held an exhibition in the Clonmel Library celebrating the history of Clonmel Theatre Guild. This was organized by Carol Achesonwith help from Bláthnaid Moore and CarolanneMulloolyalso with support from the committee:Jim Malone, Janet McEntee, Adrienne Small, Edmond Ryan, Tom Callery, Michael Hennessy, Fidelma Collins and Hugh Hennessy. At the launch of the exhibition founder member Dennis O’Sullivan spoke about the forming of the Guild in 1969. He spoke of how the foundation for the future of the Guild was set by the founding members in those early years before handing it over to the next generation of members. Edmond Ryan one of the longest serving members who joined in 1984 spoke about the last 35 years. He stated that over that time,the Guild has produced over 110 productions andthere were always key members involved at different times who kept the Guild going over the years. He said that he was glad to see some of those key members in the Library and thanked them for coming. He finished by saying he hoped that the present generation would be ready to take the Guild into the next 50 years when the baton is passed on. To be continued……..